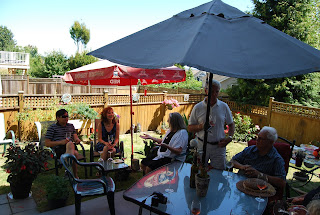 This year our annual tasting was held on July 26th. This very exciting event is so special it is not held every year. It was a smaller than normal; everyone is so busy these days and we have a much smaller yard. However, we were blessed by having some close friends enjoying the quality wines. 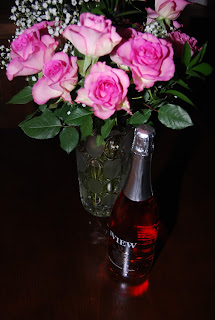 We began the event with a sparkling wine from The View Winery in East Kelowna 2014 Distraction Frizzant. A dry sparkling, made from Pinotage, Gewurztraminer, and Ehrenfelser grapes a nice patio wine on a warm summer day. 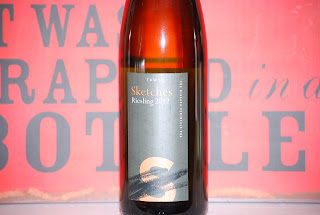 After the sparkling wine appetizers were served, what a feast! We then did a wine challenge comparing Rieslings from British Columbia, Ontario, and Washington State. Our guests were not told which wineries they were tasting. The majority favoured the Blackwood Lane 2009  Riesling from BC,  while others preferred the Tawse Winery 2014 Sketches Riesling from Ontario 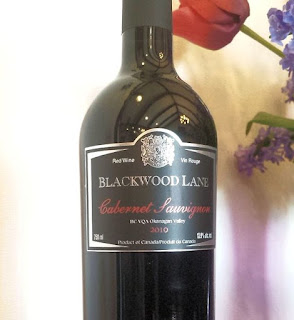 It was now on to an open cellar where you could select any wine on hand. Reds were added to the mix. Not surprised to find the favourite was the 2010 Cabernet Sauvignon from Blackwood Lane, my entire stock was consumed.

Winemaker and owner Carlos Lee of Blackwood Lane provided us with a tasting of his yet to be released, port style wine. What a treat!

The tasting began at 2:00 pm with the last guests leaving at 9:30 pm. All had a most enjoyable time looking forward to the next one.

Taming of the Shrew at Township7 Vineyards 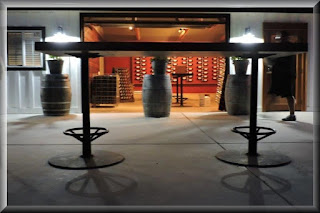 Having experienced visits to Township7 in Langley we decided to attend an evening performance of Shakespear's "Taming of the Shrew"  presented by Bard in the Valley.  We were joined by our good friends Ken and Jane who are fantastic in helping promote our website.

The weather was not promising, with heavy black clouds threatening rain but the air was warm so we decided to chance it.  We began the event with a picnic supper of chicken, salads and watermelon along with Township7's Cabernet Sauvignon and Reserve Sauvignon Blanc. 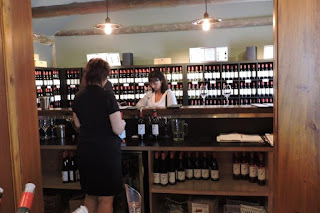 The wineries new tasting room and picnic area are very impressive. The wine bar was crowded but the staff was prepared and provided wonderful service. We were all very impressed by their hospitality.

Prior to the start of the play we met Tesesa Townsley from Festina Lente Farm located across the road from Township 7. She and her husband are currently working towards opening a meadery in the near future. 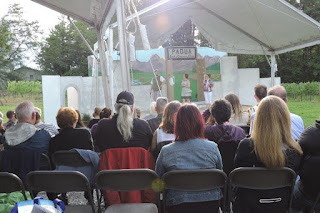 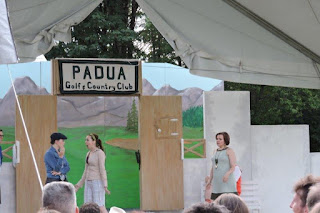 The play is a modern day version of "Taming of the Shrew" produced by Diane Gendron and directed by Darcy J. Knopp.  In this version, the boss of Padua Golf Club has a major problem, she has double booked special events for her two most important clients. It was well done and the energy of the performers was catching.

All in all, it was a fun night with good friends and good wine. Please see Visit to Township7