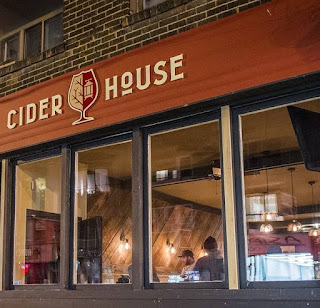 Cider is an alcoholic beverage made mainly from the fermented juice of apples, though pears can also be used; in the UK, pear cider is known as perry. In the US and parts of Canada, the term cider almost exclusively refers to nonalcoholic apple juice (apple cider). The phrase hard cider is used to denote the fermented version.

Real cider is fermented apple juice, pure and simple. Traditionally, it is made with bittersweet and bitter-sharp apples, which have the tannins and acidity required to make a quality product. While dessert apples, such as Granny Smith or MacIntosh, are used by large commercial cider makers, these common varieties often require the addition of modifiers such as concentrates and synthetic flavourings.

Defining the fruit (from National Association of Cidemakers)

Cider apple varieties are divided into four categories according to the relative proportion of acidity and tannin:

Sweet varieties are the blandest of the four categories, being low in both components. They are useful to blend with ciders from the more strongly flavoured varieties, which, by themselves, would be too extreme in taste and aroma to be palatable. Typical examples of sweet apples are Sweet Coppin, in use to a small extent, and Court Royal which was used extensively at one time but rarely used nowadays.

Bittersweet apples impart the characteristic flavour of English ciders; as the name implies, they are low in acid and high in tannin. The latter is responsible for two sensations on the palate - astringency and bitterness. In the bittersweet apple, there is a whole range of combinations of these two characteristics, varying from little astringency coupled with intense bitterness to very marked astringency coupled with mild bitterness. Typical bittersweets are Dabinett, Yarlington Mill and Tremlett’s Bitter.

Sharp varieties, so called because the predominant characteristic is that of acidity, are encountered less frequently today, possibly because culinary fruit, which has a similar flavour balance, can be substituted for this class. There are, however, recognized full sharp cider varieties, two of which are Crimson King and Brown’s Apple.

Bitter-sharp is the fourth class of cider apple. These are fairly high in acid and tannin, although the latter component does not show the wide range of flavours exhibited by the bittersweet. Stoke Red is a good example.
Posted by We Love Wine at 2:15 PM No comments: 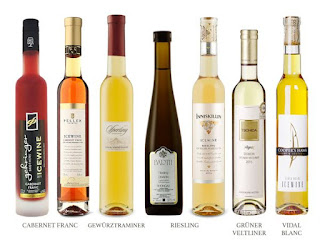 Icewine has an extravagant sweetness and intensity. Its magical balance of acidity and sweetness gives it a texture that is surprisingly elegant and sets it apart from other dessert wines. This balance of perfectly ripe fruit flavours and aromas with acidity for depth and complexity makes Icewine the least coying of all dessert wines and more likely to marry well with a wider variety of foods.

Icewines made from Vidal are noted for their affinity with honey's flavours. In addition to aromas of tangerine, apricot and pineapple, when Vidal is aged in oak it takes on rich overtones of vanilla, almonds and freshly baked bread. Vidal Icewine works beautifully in a glaze for caramelized grilled pork roast or as an accompaniment to fresh summer berries with cream, chocolate biscuits, a pear tart or a raspberry mousse.


Riesling based Icewine is renowned for its acidity and mineral notes. Its vivid orange and citrus tones will combine with a rich range of creamy and decadent food textures and tastes, from foie gras to crème brulée.

The crimson Icewine crafted from Cabernet Franc yields up the classic aromatics of baked strawberry and rhubarb pie. This wine shines when teamed up with cooked or baked fruit courses featuring cherries or wild strawberries with crème fraîche. It's spicy exotic quality is underlined when contrasted to foods with hazelnut and dark chocolate

Icewines are magnificent with cheese, especially blue cheese such as Roquefort and Gorgonzola, hard and aged cheeses like Parmigiano-Reggiano and aged Gruyere and some sheep's cheese such as Pecorino.

Milder cheeses simply fade away against the dominant Icewine flavours. Foods made with Cheese such as Sweet Chevre Scoffle with peace sauce or authentic savoury cheesecake can find no better partner than Icewine . 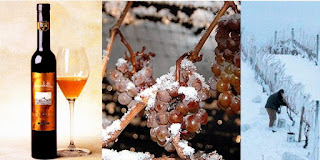 Icewines are magnificent with cheese, especially blue cheese such as Roquefort and Gorgonzola, hard and aged cheeses like Parmigiano-Reggiano and aged Gruyere and some sheep's cheese such as Pecorino.


Milder cheeses simply fade away against the dominant Icewine flavours. Foods made with Cheese such as Sweet Chevre Scoffle with peace sauce or authentic savoury cheesecake can find no better partner than Icewine .
Posted by We Love Wine at 8:00 PM No comments: