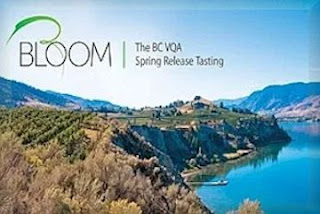 On April 26th my wife Barbara and I set out to partake in the BC VQA "Bloom" Spring Release Tasting. We left our home in Langley shortly after 12 pm. It was necessary to take our car to a suitable location where we could catch a bus for stage one of our trip.

First, we needed to put gas in the vehicle, not a pleasant  event considering we have the highest gas prices in Canada. This task was completed with ease and we set off down Fraser Highway to catch a bus. It was a beautiful day with the sun shining. The day was warm with temperatures above normal.

The bus ride was only stage two of our trip. We were headed to the Surrey sky train station. The train would take us into Vancouver. I am not one that enjoys buses or sky trains. It was a long journey.

The train had two many stops and time was rapidly passing us by. By the time we reached the stadium station, it was already past 2pm. The event located at the J.W Marriot Parq hotel was already underway.

Once we were off the train and standing on the street, we had no idea where to go. In front of us was Rodgers arena. There was a map of the area posted by the door. The Marriot was not shown on the map nor was the street next to the stadium station. We had no choice but to hail a cab. At first, the cab driver was confused as to our destination but once we informed him the hotel also housed a casino he knew where to go.

Although the distance was short it took a while due to one-way streets, heavy traffic and red lights. There was also construction to deal with. It was after 3pm when we arrived at the hotel. The doorman directed us to the elevators and said our event was on the fourth floor. 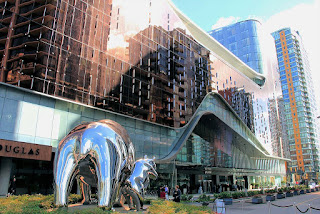 Once on the elevator, the floors went  2,3, 5,6 and so on. No button was listed for the 4th floor! Thankfully a hotel staff member was on the floor and she pushed the button CE.

Kismet Estate Winery had a very good cellar of wines as did Clos Du Soleil and Robin Ridge.

Time flies when you're having fun!  Far too soon it was time to head back to Langley. This is when we discovered the hotel had a shuttle bus to the sky train station.  At the station a friendly BC Transit employee informed it was best to wait a few minutes then we would only have to pay for a 1 zone trip instead of a three-zone fare.

The train was crowed and so was the bus trip. We stopped for dinner at the Dublin Cross Pub before making the drive home. 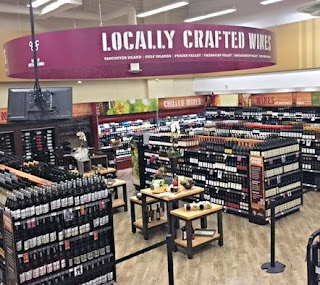 Although we try to promote wines, especially from our own country of Canada, today I am going to post a negative comment. It is all about wine tasting in grocery stores. Are they really beneficial to the wine industry?

Apparently, they must be as they continually do it. Or is it just part of the contact for the winery to provide occasional tasting? I am not one to shop for wines in a grocery store, it has happened but I am mostly there for the food items.

The wine section never seems to be busy, the tasting stage is often occupied either by store staff or marketing personal not by the winery. When I do stop by for tasting one usually find an inexperienced staff member who knows little if anything about the winery they represent. Sad!

Just the other day I found myself at the Save-On-Food Store in White Rock. My wife wished to purchase some flowers and wine. It was an extremely busy store. Parking was difficult and the store crowded. It just so happened there was a sign at the door advertising Free Wine tasting 1- 4pm. Our path took us by the wine section where a tasting stand was set up along with a display of Sandhill wines. I approached the table and waited patiently and waited.

I could see two employees both stocking shelves. I am sure they could see me. I decided to move along. However, I did return as once again my path took me by the wine section of the store. Once again I was ignored. Once again I left.

My wife was now studying the flower display. As she browsed through the flowers, made her purchase and had the flowers wrapped, I watched the tasting table. Not a single person stopped. Why!

With flowers in hand, we left the store and made our way to the government liquor store for the wine.
Save-on-foods lost a sale. Sandhill lost a sale and gained some negative publicity.

Why negative, well I sent them an e-mail about my experience that day and they did not respond. It seems many big companies have forgotten they are a customer based business and should respond quickly and efficiently to customer concerns.