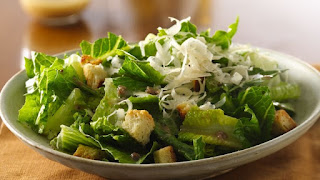 Caesar salad is one of the most popular and well-known salads in the world. The ingredients and preparation are very simple yet to be correct a balance of all the ingredients and order of assembly must be followed. There was also a very special presentation of the famous salad. The Original Classic Cease Salad is not just a recipe but there is a special technique to tossing it

Remember when the waiter or  Maître D  would wheel a table with all the ingredients to your table and prepare your salad with style and grace. Where did those days go? Why was the salad reduced to numerous varieties of the original receipt?

The popularity of this salad around the world is most likely due to a man that bears the salad's name, Caesar Cardini.  Frech Romaine lettuce was the key. Only the leaf was used, not the stem. Today the restaurants use the steam, they sneak in other types of lettuce and offer the salad up as a substitute to french fries.

They have successfully destroyed the joys of ordering a caesar salad. Sacrilegious!

Now the winemakers of today have shown the same lack of respect to their wines. Wines do not belong in a can. It is sacrilegious to do so. 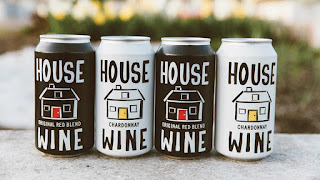 Some resources claim the first wine in a can appeared in 1996. Humbug I saw it on my honeymoon in 1992. It failed back then to gather a following.

A current article claims Barokes Wines of Australia was first to introduce wines in a can. Barokes Wines was founded by Steve Barics and Greg Stokes, reputedly after narrowly avoiding an experience involving a shattered wineglass and a spa. They saw wine in a can as a solution to all those situations where glasses and bottles were either forbidden or ill-advised.

Francis Ford Coppa produced a can wine in 2002. It was at first successful but faded quickly. 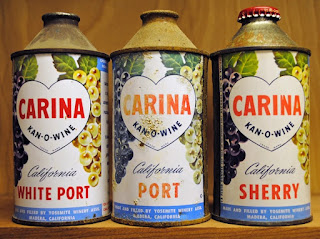 My research goes back to 1935. Acampa Wines from Lodi Ca put their wines in a can. Bear Creek Vineyards, also of Lodi soon followed.
It is not clear when can wines were introduced in Europe. They are not at popular there with the exception of Germany. Japan also seems to be supporting can wines. Moncigale, a French wine company is promoting the use of cans for their Rose. They say cans are better as they keep the wine "cooler" than a wine glass. Thus provide better flavours.
Moncigale receives wine from around 300 winemakers and co-operatives and is in partnership with a young firm which patented a method of making cans adapted for wines. “The cans are of very thin aluminium with a special coating baked on to cope with the wine’s acidity and to make sure the packaging is absolutely neutral and does not affect the taste. They also have a bit of nitrogen added to make sure the wine does not oxidise and that also gives a bit of a ‘psscht’ noise when the can is opened.”
Canada, sadly, seems to have developed a desire to place their wines in cans starting in 2020. And we all know how popular 2020 is.

One Ontario writer gives brothers Greg and Yannick Wertsch, owners of Ontario’s Between the Lines Winery, credit for starting can wine in Canada.

Castoro de Oro is said to be the first Okanagan winery to produce wines in a can. I love their wines but cans no thank you!  I believe the View produced a can wine before this called Bing. But to each their own.

Next time you are out enjoying a five-star diner and the waiter brings your wine in a can, enjoy the moment!

An improperly made caesar salad and a can of wine just $30.99 at a restaurant near you, enjoy! 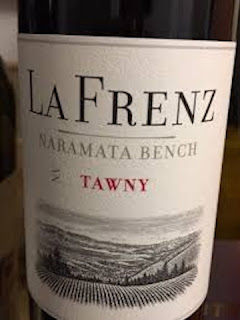 Port is a fortified wine. Fortified wines are made by adding a proportion of grape spirit, or brandy, to the wine at some point during the production process. The name comes from the harbour Porto this harbour is located in the City of Oporto . Some say Port was named after the city. The original wine region from which Port first came is called Douro. Today port wine is made in numerous countries; Canada has building a reputation for fine Port style wines .The Canadian Government reached an agreement with Portugal. Agreeing that only wines made in Douro maybe referred to as Port.

On December 31, 2013, the Canadian wine industry will no longer be able to use the terms “Port” and “Sherry”, as per the Canada-EU Wine and Spirits Agreement (CEWSA). Article 12(2) of CEWSA requires Canadian producers to stop using certain geographic indications in any market to describe or present wine.

In June, the final Fortified Wine Guidance Document was issued by the CVA Fortified Wine Committee to help ensure a smooth transition with full compliance to labelling laws and regulations. The new classifications (presently known as “Port’ and “Sherry”) are intended for the Canadian market, and may deviate slightly from more traditional classifications for these fortified wine products. Furthermore, flexibility has been provided for fortified wines to leave room for producers to vary their style of wine without undue restrictions.

1) Port will be replaced with Tawny, Ruby and Vintage for these styles of fortified wines produced and sold in Canada

The important fact here is that Canada produces a high quality level of fortified wines. Among the notable wines is Black Sage Vineyards Pipe made by winemaker Jason James. “Pipe” to reflect the time- honoured tradition of Port producers and the quality of this fine wine. The wine is an equal blend of Cabernet Sauvignon, Merlot and Cabernet Franc, usually the last grapes to be harvested, with a Brix level of 25 to 26. Partway

For years now we have enjoyed the fortified wines from La Frenz on the Naramata Bench. La Frenz was names Small Winery of the Year at the Riverside Wine Competition California both in 2012 and 2013.

NV Liqueur Muscat This unique fortified wine is produced in a Solera system, meaning the average age of the blend progressively becomes older. In other words, every year’s release has a percentage of our first vintage in 1999. The wine is aged in neutral oak barrels and is a blend of three Muscat varietals, the dominant one being the Schönberger grape

NV Tawny Port It has flavours of nuts,dates and dried fruits reminiscent of dark fruit cake infused with a butterscotch sauce. Tawny is a combination of vintages, it will not benefit from any additional cellaring. It shows the beautiful and complex characteristics that come from the multiple years spent in neutral barrels.

2013 Vintage Port estate grown Shiraz grapes which offer the mouth-watering aromatics of sweet blueberries with hints of white pepper. La Frenz's own custom-distilled brandy dosage adds fortification and complexity to the wine. The wine is sweet, but finishes dry on the palate.

Unsworth Vineyards, BC n/v Ovation is one we have tasted a couple of times recently We can recommend it Gold Medal Winner, 2014 All Canadian Wine Championships

Known for our icewine Canada is rapidly gaining a reputation for its Sparking wines, ciders and fortified wines. Watch for the port-style wines come out of Quebec. One winery to watch is Coteau St-Paul, QC 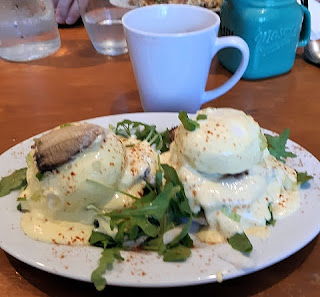 Once again Barbara and I along with two dear friends found ourself having Sunday Brunch at a very special coffee shop. A coffee shop with a very friendly, kind and skillful chef. I will of course not tell you where this hidden gem is. We want it all to ourself.

The menu is short but has expanded from our first visit just a few short months ago. It features all one needs for a classic Sunday brunch.

Without a doubt Larry the co-owner along with his wife Kelly makes the best Lobster Benny in all of Ocean Park and for that matter all of South Surrey. According to their son, he also makes the very best pancakes.

Lead by Kelsey the staff is friendly and very efficient. They help make your visit an enjoyable one. The coffee is also quite good. 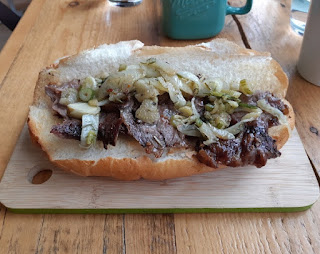 Now on Saturday Larry's featured menu item is Beef Dip! My favourite dining out meal. I mentioned that Larry was a kind gentleman. He saved me some prime rib and produced a beef dip for me.. Yum!

Now my wife is a member of the Soroptimist Club of White Rock. An organization that aids women in need. Larry and Kelly also run a clothing store beside their coffee shop. They donated a huge box of clothing for Barbara to give to the Soroptimists.

I hope you have not figured out where this little gem close to the Safeway store is located. I want to have a table when we go there. So far Barbara and I have sat at every table at least once. I like the one in the window where  I can look across the street at the community club.

Going to the coffee shop was part of Barbara's birthday celebrations. Larry provided a tiramisu for Barbara. We sang Happy Birthday to her and where joined in by a couple of Dudes at another table.

Sometimes after visiting the coffee shop we would go a block south and walk around  Kwomais Park. Other times we would go north and visit Crescent Park. I am thinking we might have to do it the other way around at work up at the coffee shop after our walk. A pulled pork sandwich or a chocolate brownie with a hot cup of coffee. 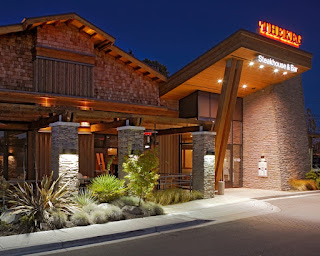 Party at the Keg

Last night a dear friend treated Barbara and me to dinner at the Morgan Creek Keg. It was Barb's birthday. It was a wonder-full time  good conversation, laughs, memories, good food and fine wine. The evening lasting over two hours.

I was a happy camper from the very start as we turned into a well lite parking lot and easily found a spot close to the entrance. The Keg has a double door entrance between the door a young lady awaited guests opening the door ensuring Covid 19 protocols. You tell she was greeting us with a big smile even under her mask. She extremely polite and soon had us inside where a second host greeted us and guided us to our table where three friends were waiting for.

Barbara and I found the chairs a bit too soft and far too low for our comfort. That was no problem for the very polite and smiling staff, who quickly replaced the chairs.

Four of us relaxed and sipped the wine as we discussed the menu. Mary's daughter Lucy needs to age a bit before she can partake. The wine was present in the proper manner and served correctly. Well done Keg!

The presentation of gifts for the birthday girl came next. It was a wonderful night for Barbara. The most memorable part was the wonderful words written on the cards.

Appetizers were ordered next. For those partaking Shrimp Cocktails was the popular choice. Those shrimps were huge and apparently delicious.

Four out of five ordered the Prime Rib classic. Classic means salad (your choice) and sides ( your choice) included. The young lady Lucy went for the steak a Top Sirloin.

Simply put the meals were prepared to perfection. My prime rib was so tender, so juicy and delicious. The portions rather larger and that's a good thing. Add a little more wine and we were all having a most wonderful evening. The time just flew by.

The birthday girl and Lucy were the only ones to have dessert. Lucky went with a chocolate brownie and Barb went for the crème brûlée.