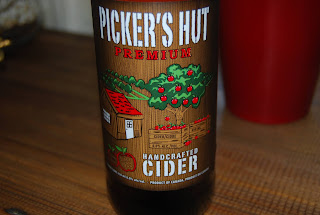 At Last a Really Good Cider

To set the stage let me take you back to my college years. The years when you would visit the bars with your buddies and drink a beer or two. The trouble for me was I did not care for beer. I desperately searched for an alternative, There was rum and coke a good alternative since you could get a weak one for just 98 cents. There was "Coolers" remember those; flavoured alcoholic beverages with relatively low alcohol content. There was also cider. Wine was in my future.

Although cider offered a reasonable choice I did not find one that had remarkable flavour,

As the years went by I, of course, discovered wines. Wines became my main beverage. Occasionally I would try a cider. It seemed though that every bar, every restaurant offered the same brand X, It was okay but nothing that excited my taste buds.

It was not until the 2000s that there was a rise in the popularity of Cider. As the years went by more and more Cideries were opening. However in BC where I live it was still brand X dominating the pubs and restaurants.

In the last ten years, a number of Cideries have opened in BC producing quality ciders. Among them Twisted Hills Cider, Tod Creek Cider, Sea Cider Farm and Ciderhouse and Fraser Vally Cider Company.

However, nothing impressed to the point of jubilation until Jennifer Turton-Molgat owner of The View Estate Winery in Kelowna introduced us to Wards Cider. The one we have tried so far Picker's Hut Premium Cider. Where flavours abound.

Ward's Picker's Hut Premium Cider is the best cider. I have had in years. Full of flavour Apple ginger cinnamon with hints of melon 97.


Overall the future looks very bright for Wards Ciders and the View Winery. We have enjoyed many wines from the View over the years and look forward to tasting all Ward ciders.