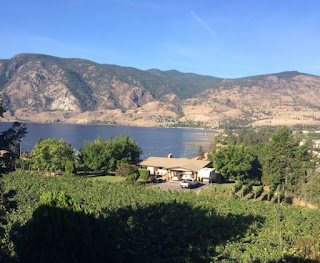 Have you heard of Cresent Hill Winery,  who won double Gold for their Glennallyn Gewurztraminer 2015.  Until then the winery operated well under the radar. But winning double gold at two major events is not what is so amazing.

Located at the north end of Skaha Lake . This places the winery at the south end of Penticton. Glennallyn Murray bought the land and planted the vineyard in the 70s with all German clones. Glennallyn started making wine in Port Moody in the 60s when Andrés winery landed there and fell in love with it. He located land in Penticton on Crescent Hill and Valley View road, and after returning home from Germany and bringing with him German root stock, he planted his vineyard. They were among the first the first vineyard in Penticton and among the very first in the Okanagan producing Gewürztraminer. He sold what he called "juice" to Casabella winery in Penticton and Calona Winery. Today the winery is owned by his daughter Teresa Murray Wisemen.

Teresa has MS. Teresa's husband Russell Wiseman is the winemaker. A winery that went unnoticed for years until Teresa and Russell brought it to life and gained the attention of  Canada's Wine Industry. Now that's amazing!

Winesofcanada.com featured the winery long before they gained this acclaim. Please read
Posted by We Love Wine at 3:32 PM