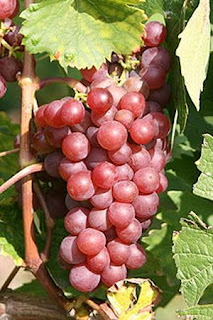 Schönburger, also spelled Schoenburger, or Schonburger is a variety of grape, formally designated Geisenheim 15-114, a crossing developed at Geisenheim Institute for Grape Breeding in Germany, and released in 1979, of Pinot noir x (Chasselas x Muscat Hamburg).
It is grown now in Germany, as well as in England where it is gaining popularity in the early 2000s and is "authorized". It can also be found in British Columbia Canada, and in western Washington state, western Oregon state, USA. A common feature of these areas is a cool climate, often maritime influenced.
This is a reliable early-ripening grape, though is susceptible to powdery mildew well suited to England climate.
Schönburger was developed in 1939 at the Geisenheim Research Station in Germany. The plant breeder crossed Pinot Noir with something called Pirovano I. This in turn is a cross of Chasselas Rose and Muscat of Hamburg; the latter explains the spicy notes.
Perhaps th number one producer of Schönburger wine in British Columbia is Black Widow Estate winery by owner/winemaker Dick Lancaster. The wine is excellent! It starts with a nice floral aroma followed by notes of honeysuckle & tropical fruit.
Their signature blend Oasis is another fine wine Pinot Gris, Gewürztraminer, Schönburger. A delicious blend of aromatic varieties resulting in a balanced wine with tropical fruit notes.
Roche Wines also produces a very good Schönburger called ARÔME.
Many wines use Schönburger in blends such as Gehringer Bros Gewürztraminer - Schönburger
Posted by We Love Wine at 1:19 PM